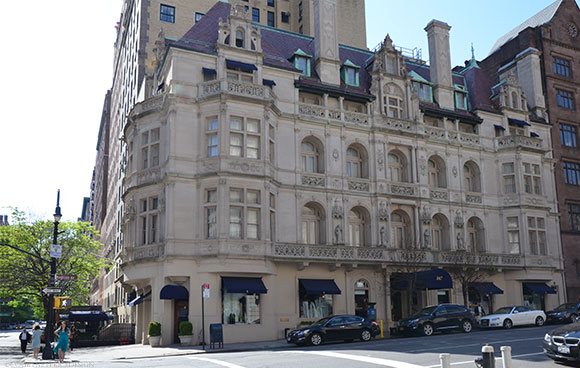 In honor of today’s Fifth Avenue POLO flagship opening, I thought we would take a look at the very first Ralph Lauren NYC flagship store and the story behind its stunning location.

The Gertrude Rhinelander Waldo House is a French Renaissance revival mansion located at 867 Madison Avenue on the corner of East 72nd Street in the Lenox Hill neighborhood of Manhattan, New York City. Completed in 1898, it was modeled after a châteaux of the Loire Valley in France. The plan was for this home to outshine the Vanderbilt limestone palace. Gertrude Rhinelander Waldo, the eccentric New York heiress who commissioned the mansion, made numerous trips to Europe to buy art, furniture, and statues, which were shipped back in crates and stored in rooms and hallways of the home.

Gertrude never actually moved in, never opened those crates. Widowed after two short years of marriage, she preferred to live across the street in a town home with her unmarried sister.  She was unable to maintain the building and it went into foreclosure in 1909. The crates of valuable furnishings, never opened, were the cause of multiple lootings of the property in 1909. She died in debt in 1914. The building remained vacant until 1921, at which time the first floor was converted into stores and two apartments were carved out of the upper four floors. Commercial enterprises which have used the location at various times include an antique store, Christie’s auction house and a Zabar’s-owned restaurant. Then greatness happened:  END_OF_DOCUMENT_TOKEN_TO_BE_REPLACED