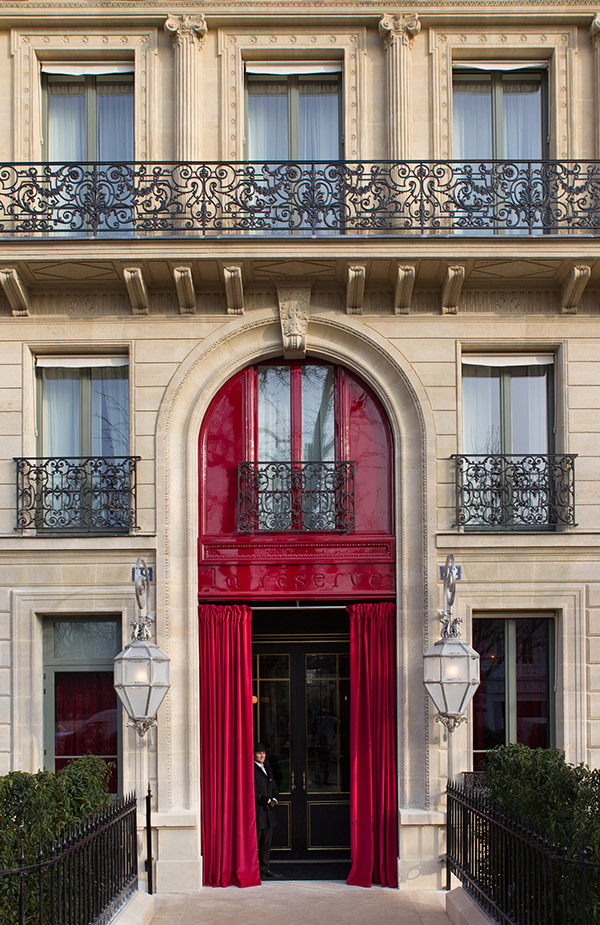 Located at 42 Avenue Gabriel, La Réserve is set back from the Champs-Elysées in a peaceful, stately neighborhood of the 8th arrondissement. The grande red entrance beckons, promising a spoiling experience of Paris. There is no classic reception desk per se, but instead, every guest who arrives at 42 Avenue Gabriel is welcomed personally in the Salon Louis XV and taken to their suite to make sure that they feel at home immediately, just as one would do for a friend coming to visit at home.
La Réserve offers more suites than rooms, large spaces in re-interpreted classical style, all the codes of a certain way of life: a library with an honesty bar reserved for guests and their friends, a smoking room, a 16-meter indoor pool (a rarity in Paris- which likely inspired the Baccarat Hotel’s indoor pool in New York), a spa with three treatment rooms including one specifically for men, wine cellars in the suites… a world designed for lovers of fine things who appreciate ultra-personalized services, perceived as rare and therefore all the more precious tokens of attention. Owner Michel Reybier’s urban mansion has all the elegance of an early 19th-century private apartment.

It is funny how certain things catch your eye unrelentingly, over time. For me it was this library, which found it’s way onto my bucket list after multiple screenshots, pins and saves- enough times to need to see it IRL. Uplit books, paneled walls, neoclassical elements and plush emerald seating offer private nooks for intimate conversations or a peaceful place to read and recharge. 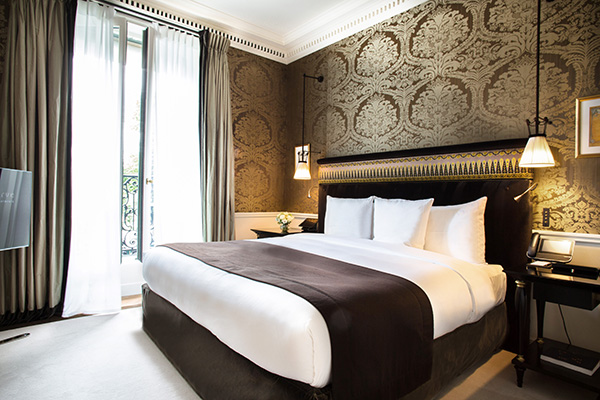 La Réserve’s makes every moment truly amazing with unexpected personal touches. Decorator Jacques Garcia drew his inspiration from canvases by James Tissot, famous for subject matter of bourgeois Paris in the 19th century. The lobby and the potted jasmine plants pay particular tribute to this artist. If you wish to admire some of James Tissot’s works, pay a quick visit to the Musée d’Orsay, right next to the Seine…
La Réserve Paris offers two versions of grandeur-  with a classical dose of 19th-century Parisian design at the hotel/spa and a more contemporary experience at their separate property of apartments, located about a 15-minute drive away. 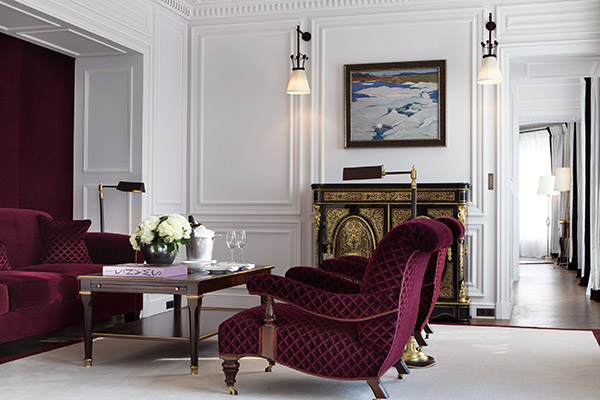 Michel Reybier wants each one of his guests, known or unknown, (but always recognized) to feel at home at the same time as being somewhere completely different, and to share a way of life rooted in excellence, authenticity, and simplicity. The service is attentive, yet discreet. Renowned Executive Chef Jérôme Banctel has both hotel restaurants, Michelin 2-starred Le Gabriel (French gourmet) and La Pagode de Cos (seasonal cuisine, epicurean creativity). Luxurious details await all of your senses.

La Réserve Paris is reminiscent of a private urban mansion. Located on the right bank, a stone’s throw from the Elysée Palace and the Champs-Elysées, in a peaceful location and slightly set back from the most famous avenue in the world. Rooms overlook some of the city’s key sights: the Eiffel Tower, the Pantheon, the Grand Palais, and the Concorde obelisk. 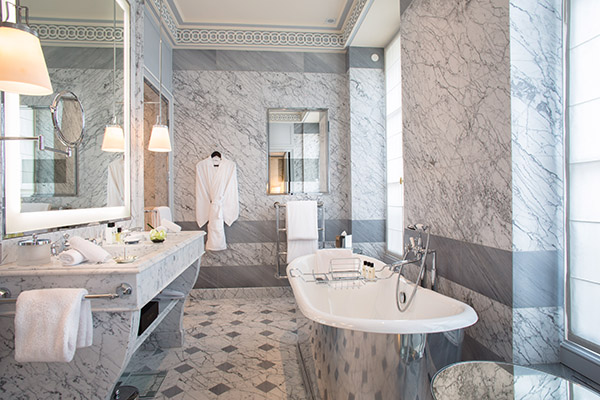 Because everybody loves a colorful dose of French History:

The highly sought-after 8th arrondissement won acclaim from the beginning of the 19th century. over the years, the emergence of the famous nearby ‘Golden Triangle’ has made this quadrangle even more valuable – to the point of it becoming the symbol of Parisian lifestyle. The history of avenue Gabriel embodies the quintessence of the Haussmann spirit to perfection. In 1818, avenue de l’Elysée, which had existed since the creation of the champs-Elysées in 1670, was extended beyond Avenue de Marigny, right up to Place de la Concorde. It was then called avenue Gabriel, in tribute to the architect Ange-Jacques Gabriel (1698-1782). As first architect to the King, he created the Place Louis XV, which is today known as Place de la Concorde.
At the beginning of the 19th century, and then during the Second Empire, the Champs-Elysées district became the prime location for elegant Parisian life. alongside the six houses bordering avenue des champs-Elysées in 1800, luxurious dwellings – Haussmann urban mansions, buildings or bourgeois homes – swiftly appeared. All the gardens were assigned to the Paris municipality that developed them.
In 1854, the construction of the building located on the angle of avenue Gabriel and the Rue du cirque became part of this dynamic. It belonged to the family of the Duke of Morny, a powerful figure in the Second Empire.
The illegitimate son of Hortense de Beauharnais and the half-brother of Napoleon III, the Duke of Morny had a number of illustrious ancestors, including his grandfather, Talleyrand. This ambitious visionary swiftly understood the changing 19th-century french society and the consequences of the industrial revolution. following a glorious military career, he changed course, leveraging his business acumen and political talent. Upon being elected as a member of parliament for Clermont-Ferrand in 1842, he invented lobbying on behalf of the sugar industry. This aristocrat, dandy, art collector, racehorse owner, and developer of the Longchamp racecourse was the man who first launched Deauville as a fashionable resort.
Owned by the Duc of Morny’s family until 1888, the building was completely occupied by large apartments. Subsequently acquired by Pierre Cardin’s compagnie d’exploitation et de financement capucines, it became the property of Michel Reybier and his family. 160 years after it was built, Michel Reybier and his family have now made it the most stylish address in Paris. 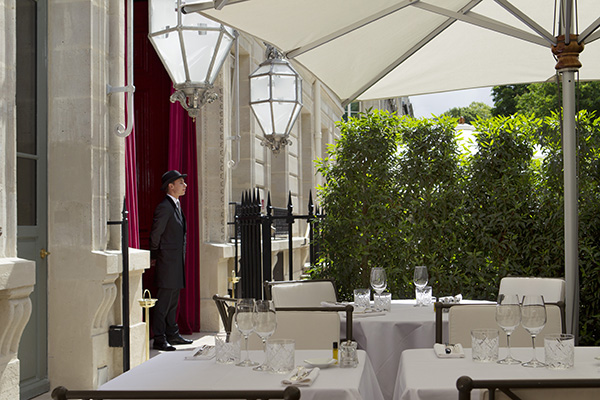 The Pierre, a Taj Hotel