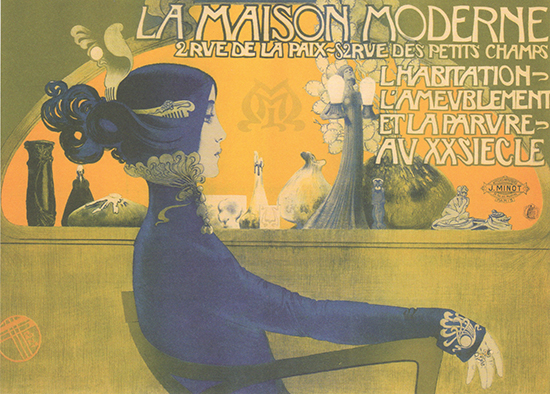 This poster was done in 1900 by artist Manuel Orazi as an advertisement for a fashionable new Home and Decor Shop that featured home wares, furniture and “finery of the twentieth century”. La Maison Moderne was started by the woman featured, she commissioned this poster. How progressive of her, in an era full of firsts on the female front.

Romance and revolution were in the air, the Moulin Rouge was the hottest ticket in town, the Exposition Universelle (the Worlds Fair) was held in Paris- where talking films, diesel engines and escalators were first introduced, and Campbell’s Soup received the gold medal that still to this day appears on their packaging. The 1900 Summer Olympics were also held in Paris (as part of the Exposition Universelle) – and women participated in the games for the first time. 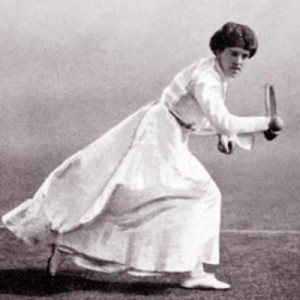 This was the beginning of the decade that marked the full flowering of Parisian haute couture as the arbiter of styles and silhouettes for women of all classes.

Meanwhile, the enterprising woman in the poster above was starting her home decor business in 1900… boldly asserting herself as expert on what “finery of the twentieth century” was to be for the modern home… (uh, hello, in the first year of the century, she sounds like quite a character). Wouldn’t it be fun to meet her and check out her store?