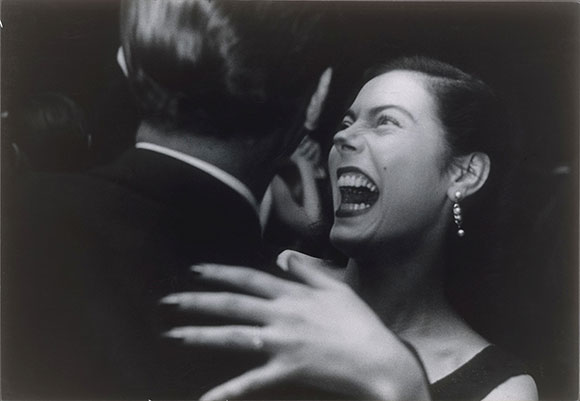 The first retrospective in 25 years of work by Garry Winogrand (1928–1984)—the renowned photographer of New York City and of American life from the 1950s through the early 1980s—will open at The Metropolitan Museum of Art on June 27, 2014. Garry Winogrand brings together more than 175 of the artist’s iconic images, a trove of unseen prints, and even Winogrand’s famed series of photographs made at the Metropolitan Museum in 1969 when the Museum celebrated its centennial. This exhibition offers a rigorous overview of Winogrand’s complete working life and reveals for the first time the full sweep of his career.
The exhibition is organized by the San Francisco Museum of Modern Art and the National Gallery of Art, Washington. The international tour is sponsored by the Terra Foundation for American Art. Leadership support is provided by Randi and Bob Fisher. Additional support is provided by the Blavatnik Family Foundation and The Daniel and Estrellita Brodsky Foundation. 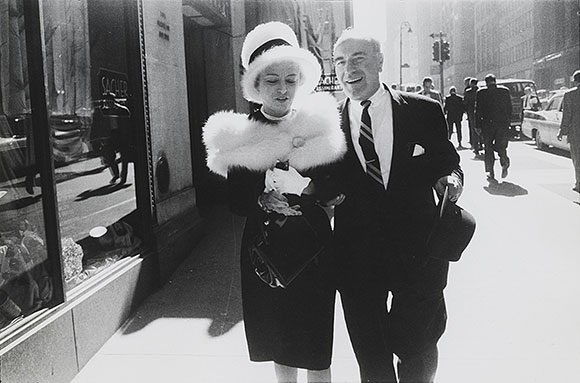 Born in the Bronx, Winogrand did much of his best-known work in Manhattan during the 1950s and 1960s, and in both the content and dynamic style he became one of the principal voices of the eruptive postwar decades. Known primarily as a street photographer, Winogrand, who is often associated with famed contemporaries Diane Arbus and Lee Friedlander, photographed with dazzling energy and incessant appetite, exposing some 26,000 rolls of film in his short lifetime. He photographed business moguls, everyday women on the street, famous actors and athletes, hippies, politicians, soldiers, animals in zoos, rodeos, car culture, airports, and antiwar demonstrators and the construction workers who beat them bloody in view of the unmoved police. Daily life in America—rich with new possibilities and yet equally anxiety-ridden and threatening to spin out of control—seemed to unfold for him in a continuous stream.
Yet if Winogrand was one of New York City’s premier photographers, he was also an avid traveler. He generated exquisite work from locations around the United States including Los Angeles, San Francisco, Dallas, Houston, Chicago, and the open country of the Southwest. “You could say that I am a student of photography,” he said, “and I am; but really I’m a student of America.” Winogrand’s expansive visual catalogue of the nation’s evolving social scene has led to comparisons to Walt Whitman, who also unspooled the world in endless lists of people, places, and things. 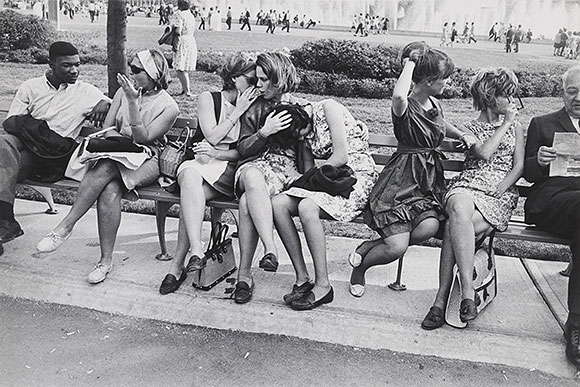 Winogrand’s pictures often bulge with 20 or 30 figures, and are fascinating both for their dramatic foregrounds and the sub-events at their edges. Even when crowded with people or at their most lighthearted—he was fond of visual puns and was drawn to the absurd— his pictures convey a feeling of human isolation, hinting at something darker beneath the veneer of the American dream. Early on, some critics considered his pictures formally “shapeless” and “random,” but admirers and critics later found a unique poetry in his tilted horizons and his love of the haphazard.
“Winogrand was an artistic descendant of Walker Evans and Robert Frank, but differed sharply from them,” says Leo Rubinfien, guest curator of the exhibition. “He admired Frank’s The Americans, but felt the work missed the main story of its time, which in his mind was the emergence of suburban prosperity and isolation. The hope and buoyancy of middle-class life in postwar America is half of the emotional heart of Winogrand’s work. The other half is a sense of undoing. The tension between these qualities gives his work its distinct character.”
After serving in the military as a weather forecaster, Winogrand began working as a photographer while studying painting on the G.I. Bill at Columbia University (1948–51). During that time, he also studied briefly with Alexey Brodovitch at the New School for Social Research. While pursuing his personal work, he supplied commercial photographs to a number of general-interest magazines such as Life, Look, Sports
Illustrated, Collier’s, and Pageant, which were then at the height of their power and reach. His career was shaped further by the decline of those magazines and the rise of a new culture of photography centered in the art world.
While Winogrand is widely considered one of the greatest photographers of the 20th century, his overall body of work and influence on the field remain incompletely explored. He was enormously prolific but largely postponed the editing and printing of his work. The act of taking pictures was far more fulfilling to Winogrand than making prints or editing for books and exhibitions, and he often allowed others to perform these tasks for him. Dying suddenly at the age of 56, he left behind approximately 6,500 rolls of film (some 250,000 images) that he had never seen, as well as proof sheets from his earlier years that he had marked but never printed. 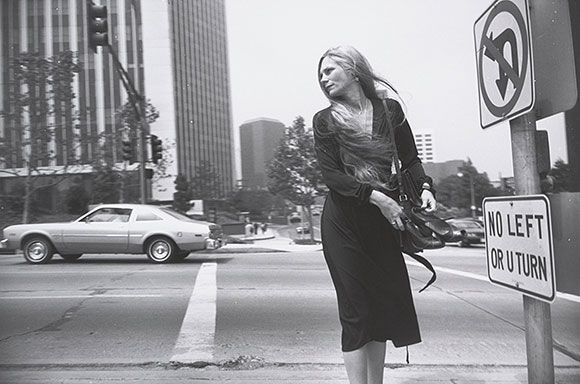 “There exists in photography no other body of work of comparable size or quality that is so editorially unresolved,” says Rubinfien, who was among the youngest of Winogrand’s circle of friends in the 1970s. “This exhibition represents the first effort to comprehensively examine Winogrand’s unfinished work. It also aims to turn the presentation of his work away from topical editing and toward a freer organization that is faithful to his art’s essential spirit, thus enabling a new understanding of his oeuvre, even for those who think they know him.”
The exhibition is divided into three parts, each covering a broad variety of subjects found in Winogrand’s art. “Down from the Bronx” presents photographs made in New York from his start in 1950 until 1971; “A Student of America” looks at the same period during journeys outside New York; and “Boom and Bust” addresses Winogrand’s late work—from when he moved away from New York in 1971 until his death in 1984—with photographs from Texas and Southern California, as well as Chicago, Washington, Miami, and other locations.
The exhibition will be featured on the Museum’s website at www.metmuseum.org.
Prior to its presentation at the Metropolitan Museum, Garry Winogrand was on view at SFMOMA and the National Gallery of Art, Washington, D.C. ( March 2–June 8, 2014). Following its showing in New York, it be on view at the Jeu de Paume, Paris (October 14, 2014 through January 25, 2015), and the Fundacion MAPFRE, Madrid (March 3- May 10 2015) 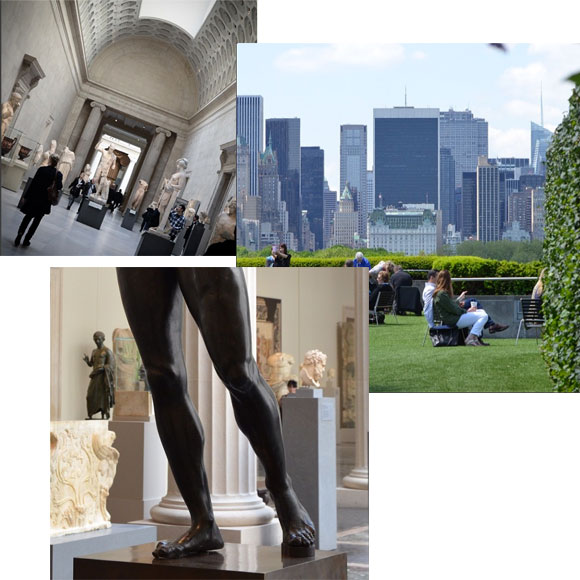 The Carlyle Hotel and its Famous Bemelmans Bar