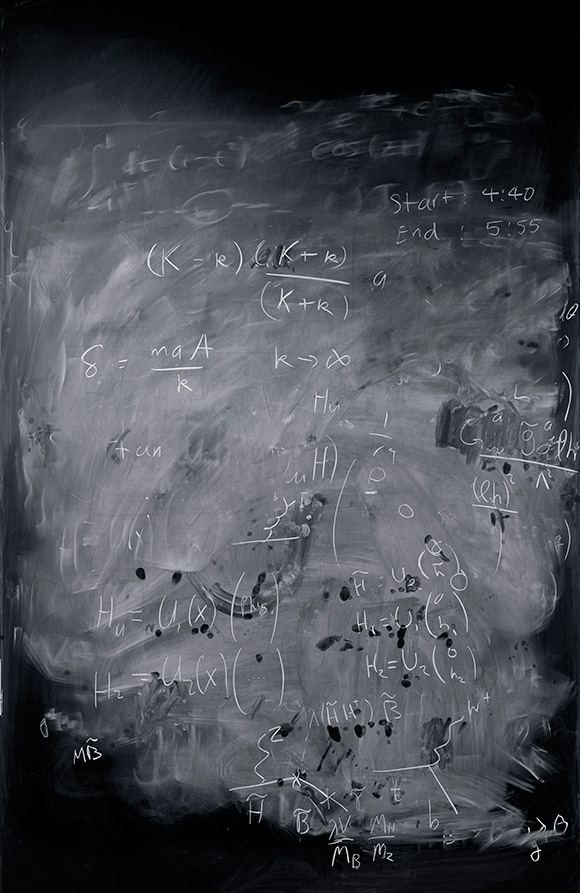 Momentum is a body of work created over a three-year project during which Alejandro Guijarro travelled to the world’s great quantum mechanics institutions and photographed blackboards. He visited . The resulting photographs are as big as the blackboards themselves, and the resolution is so realistic that the viewer might be tempted to run a finger across the image just to see if it will return chalk covered. I had the pleasure of seeing this powerful series at The Dallas Art Fair earlier this year. The grouping of his works becomes a force field of sorts; these massive “blackboards” have a way of magnetically pulling people in- perhaps those who enjoy intellectual pursuits might be drawn to them in hopes that osmosis might set in. The designer in me would love to see these in an office or a library… like my own, selfishly.  Of course I had questions for the artist, which unearthed the deep thoughts behind the Momentum series. Meet Alejandro Guijarro and view more of his series here:

Q: What inspired the Momentum series?
A: The main concern of my work is the relationship between the so-called “reality” and photography, attempting to question this relationship. The idea came to me after having a conversation with a physicist, at some point, he mentioned that the only way to represent reality in an objective way it is through mathematics. This series attempts to investigate that statement and all the paradoxes that emerge from these contradictory objects: the blackboards.
Momentum attempts to make “connections” rather than finding an objective truth. The objects represented in the series dwell in a very paradoxical space – not just with regards to the contrast between the solidity and absoluteness of scientific knowledge and the fragility and ephemerality of the writing in chalk, but also because these objects are “forged” by opposite natural impulses: the conscious and the unconscious of the mind. The conscious is conveyed by the exercise of human logic (mathematics) and the unconscious is articulated through the intuitive, automatic, abstract gesture of the act of erasing. They contradict each other but somehow cohabit this space in peaceful harmony, establishing a sense of “oneness” between physical and psychological representations of certain aspects of the world.
To my mind, these blackboards could function as a metaphor for the history of Science, someone came up with a theory about how the world looks like but after a while it gets erased by someone else writing a new one and that one it gets erased again by someone else. It seems to be an endless process but there are always remaining traces from those past theories.

Q:  Why quantum mechanics? Do you study it? Do you have a favourite historical figure in the field?
A:  I haven’t studied physics at all, for me it is like a foreign language, what attracted me about these objects was the possibility to play with the relationship between meaning and context, these chalkboards make complete sense in their original context, physicists can understand their content and they can relate to their specific and precise meaning but when you place them in the gallery space, the meaning evolves and the equations become large ambiguous drawings open to a number of new possibilities.
The choice of quantum mechanics as a subject is not accidental. To put it in a very simplified way, while classical physics see the world as the determination of causal natural laws of nature, quantum physics see it as statistical probability, where a specific event is “likely” to happen. In quantum physics the figure of the observer has a fundamental role in the ultimate understanding of a phenomenon. In the same way, the images in this series do not purport to be deterministic documents holding an objective truth. They function purely as suggestions. They are fragmented pieces of ideas, thoughts or explanations from which arises a level of randomness.
It would be difficult to choose a single historical figure, but it would be foolish not to mention Niels Bohr, Werner Heisenberg, Richard Feynman, Paul Dirac…

Q:  Did you have any issues gaining access to those institutions/classrooms?
A:  It took me some time to gain access to these places but after a while, I managed to meet a physicist who used to work at CERN, but she was now working in a lab in Spain. I spoke with her, told her my idea and went to see her. She introduced me to someone from CERN; someone from CERN introduced me to a physicist from Berkeley and so on. At the beginning they were surprised by my interests, but in general we got along very well and they were very generous sharing their time and passion with me. 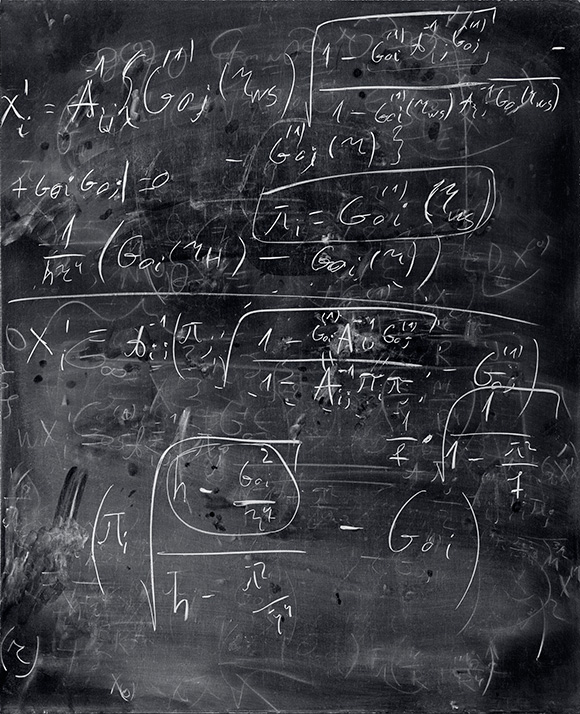 Q: What was your equipment setup like for these shoots?
A: I used a traditional large format camera but even if this type of camera gives a very detailed image, I took several photos, “sweeping” the chalkboard from left to right. I then scan those negatives and eventually stitch them together on the computer. The result is this huge digital file that allows me to print with enormous precision. Afterwards, I frame them. The final photographs are to scale with the original subject and allow the beholder to dwell upon the nature of the object at hand, on whether it is the real thing or a representation of it.
I do not alter the blackboards; I have tried to record them with the minimum interference. It is all about the encounter with them. 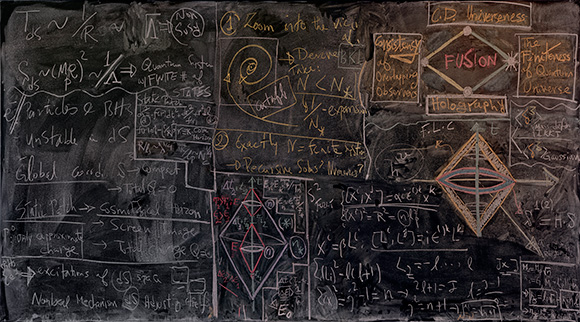 Q: Tell us more about you and your background:
A: I was born and raised in Madrid where I did a BA in Graphic Design. During that time in college I spent most of my time in the dark-room so it was a reasonable move all to move all my focus into photography. In 2005 I moved to London where I graduated with an MFA from the Royal College of Art.

Q: Who is your favourite artist/photographer
A: I don’t really have favourites; I look at different artists depending on what I am working on. For the Momentum series I was influenced by artists like Cy Twombly, Gerhard Richter, Ad Reinhardt to name a few.

Q: As a professional, what advice would you give to aspiring photographers?
A: Keep trying seems to be working for me, but I don’t think I’m in a position to give advice yet.

We see that Alejandro Guijarro is talented AND modest.  We will have to stay tuned for his next series, which is in the works now…

In case you missed it: Highlights of the Dallas Art Fair 2015, Huffington Post